Our journey began 5 years ago. We got pregnant but I had a miscarriage at 5 weeks for the second time. We continued to try to conceive on our own for 4 years and were unsuccessful. We were referred to Dr. Pinto by my best friend, who was also a patient of his, in January of 2016. The moment I walked into Repromed I had a feeling that I was exactly where I was meant to be. Everyone always made me feel so comfortable and gave me hope even when I was feeling discouraged. After several tests I was diagnosed with PCOS and Uterine Polyps. I had surgery in June of 2016 to remove the polyps and we then began treatment to battle the PCOS and we were able to conceive on our 3rd cycle of IUI. We got the best gift ever for our anniversary and Valentine’s Day of 2017 by getting a positive pregnancy test! We had a successful pregnancy and gave birth to our son Eduardo Santos Ceron on 10/18/17. We will forever be thankful for Dr. Pinto and all of his staff. They became a very important part of our lives. Without them we wouldn’t have become mommy and daddy to our miracle baby boy! 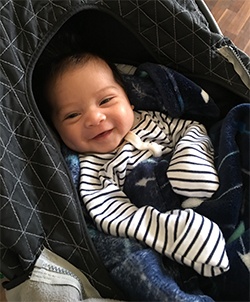