About 30 percent to 40 percent of women with endometriosis are infertile, making it one of the top three causes for female infertility. Endometriosis is when the kind of tissue that normally lines the uterus grows somewhere else. It can grow on the ovaries, behind the uterus or on the bowels or bladder. Rarely, it grows in other parts of the body.

How endometriosis impairs fertility; as with any medical condition the answer depends on severity. In more advanced stage III and stage IV disease, the scarring (adhesions) caused by endometriosis can interfere with the ability of fallopian tubes to pick up eggs for fertilization.  It is more difficult to explain the effects on infertility in the less severe Stage I and Stage II endometriosis. However, endometriosis-related infertility is often treated successfully using hormones and surgery.

Endometriosis is one of the most common gynecological diseases, affecting more than 5.5 million women in North America alone. The two most common symptoms of endometriosis are pain and infertility. Some women have pain before and during their periods, as well as during or after sex. This pain can be so intense that it affects a woman’s quality of life, from her relationships, to her day-to-day activities. Some women don’t have any symptoms from endometriosis. Others may not find out they have the disease until they have trouble getting pregnant.

The word endometriosis comes from the word “endometrium” — endo means “inside” and metrium means “mother.” Health care providers call the tissue that lines the inside of the uterus (where a mother carries her baby) the endometrium.

Endometriosis occurs when tissue like that which lines the inside of uterus grows outside the uterus, usually on the surfaces of organs in the pelvic and abdominal areas, in places that it is not supposed to grow. The body does not want it there, and tries to get rid of it.  The mechanism the body uses to try to get rid of endometriosis is inflammation.  If you get a splinter in your finger, you know the skin around it becomes red and is painful.  That is inflammation.  Inflammation causes pain.  Not all women with endometriosis have painful periods. Even though endometriosis can impair fertility, there are a number of women who have had successful pregnancies, even if they have endometriosis.

In what places, outside of the uterus, do areas of endometriosis grow?

Most endometriosis is found in the pelvic cavity: 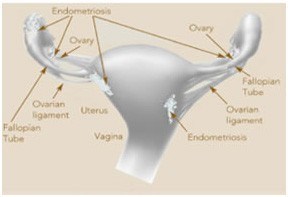 In extremely rare cases, endometriosis areas can grow in the lungs or other parts of the body.

What are the symptoms of endometriosis?

General symptoms of endometriosis can include (but are not limited to):

In addition, women who are diagnosed with endometriosis may have gastrointestinal symptoms that resemble a bowel disorder, as well as fatigue.

Apparent risk factors for endometriosis also include a low body mass index (BMI), alcohol use and smoking. African American women are less likely to have endometriosis.